Foxfire… The name evokes an image of wildings alive with the flame of life! The namesake Communities were created almost 40 years ago at the end of the 70s “in the country” of East Sarasota County. Proctor Road barely had pavement beyond Beneva Road while the Interstate was still on the drawing board! Melvin Steinbaum advertised his development as “…a new wooded paradise of 2 acre homes…” in 1980. Ahhh, how things move in that familiar cycle. First, we’re Family Farmers working the land. Next we’re Hip Young Urbanites with J-O-Bs. Then, we’ve gravitated to the suburbs with kids in tow for more space and finally? We want to retire as Gentleman and Lady Farmers!

The beauty of Foxfire and Foxfire West with its present-day location east of I-75 and planned large homesteads (and zoning) is they make fantastic Equestrian Communities. Four horses and two separate outbuildings are permitted per Homeowner. The outbuildings can be a stable and a guest house. The private roads on the interior can be used for riding with natural shade provided by mature landscape giving the feel of a beautiful park. 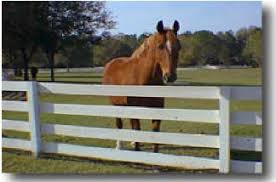 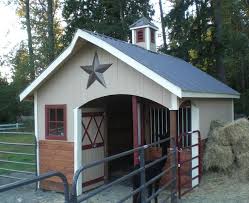 Suburban-Style Barn (Not a community building)

Foxfire, created first, is comprised of a series of cul-de-sacs circling west off Proctor Road as it bends southward towards Clark Road. Each cul-de-sac has a horse-related name and is connected in the rear by riding trails. Foxfire West surrounds a man-made lake with about a third of the homes having waterfront. Both communities are heavily wooded in a natural manner providing the perfect backdrop for an abundance of wildlife to flourish alongside the Residents. There are minimum home size requirements, 2,000sf in Foxfire and 1,850sf in Foxfire West with most homes built at 2,500-3,000sf up to the 5,000-6,000sf range.

The architecture standards are simple: Foxfire West dictates that no two houses can look alike! So there are a variety of styles, most having been constructed in the late 1970s and early 1980s. Both communities maintain HOAs with fees of $500 at Foxfire and $650 at Foxfire West to maintain the private roads mostly. The Resident mix has slowly moved from Older Professionals and Retirees to Younger Families and Middle Age Professionals. With the construction of nearby schools in recent decades, families, in particular, now have a more convenient choice about living east of I-75.

These are two superb Communities to raise a family, get away from the job race, and/or retire in peaceful serenity to enjoy life.

Give us a call to see how you can slip into the wild easily!

Keller Williams On The Water Sarasota

Want to know more about the Sarasota Area? Check out these Resources: